Yesterday the Human Rights Network for Journalists-Uganda (HRNJ-Uganda) sent out a message on the disappearance of Augustine Okello aka Rouks, a radio presenter at Rhino fm based in Lira. Okello was last seen at the office of the District Internal Security officer on Wednesday last week. Since July 13 he has not been seen.

Journalists believe there’s a chance he’s being help incommunicado by authorities. Today over 50 journalist marched to the central police station in Lira to deliver a petition demanding that authorities explain where Okello is being held and why he’s being held.

The the DISO Eryaku Steven shut his office and never met with the journalists. Okello is also a student at UMCAT School of journalism-Lira Study Centre. Eryaku denied Okello’s whereabouts but the presenters motorbike has been parked at the station since he’s disappearance. The police is not talking about the case and they claim to have opened an inquiry.

Detention with charge for anyone is supposed to be illegal the last I checked but may be as many things in this country change day and night that too could have changed.

This case just reminded me my recent trip to the Newseum in DC where I found the case of Hussein Musa Njuki a journalist who died in detention on August 28 1995 three days after his arrest. Police said he had died of natural causes but few believe that account. Whatever Okello did police or security forces are violating the 48 hr rule for any detention.

Others on the list of journalist who have been killed in Uganda at the Newseum. 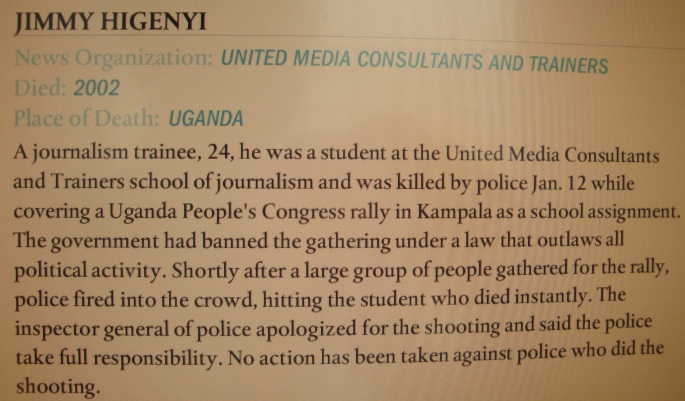 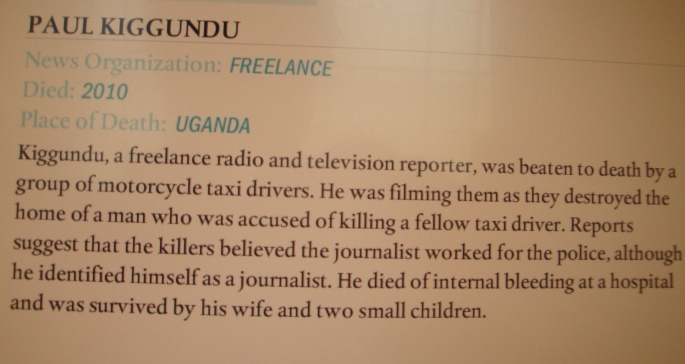