Shortly before Christmas, a young woman was killed in our republic. At only 24, she had already made a small mark on our democracy that many have struggled to make over 3 decades rule. Cerinah Nebanda was a parliamentarian. Her death was sudden, multi-organ failure. Rumours spread about who could have done this cruelty in a land where a fundamental change was delivered 27 years ago ensuring all Ugandans could finally sleep peacefully in their homes- something that was unheard of since our independence.

This death came as a shock in a year when we commemorated our 50 years of independence in a way that looked more like 27 years of independence. Many people scrambled for the microphone, some to with outrage, sorrow, fear and others to defend themselves. To wash themselves clean- even if it meant using words mixed with anger and threats. Some Ugandans left their thoughts online.

You couldn’t escape from the name Nebanda. In my small village in Kibona, Bushenyi, an older man came to my home to ask me about what could have killed this young woman – with a kind of worrisome voice I rarely get from him. In a country where every night a district is born, many local people are mostly pre-occupied with local politics. But name of Nebanda who hails from a village, more than 500kms from my own, found its way to my Christmas day. A government autopsy report told the citizens that the young woman’s death had to with narcotic drugs and everybody else trying to get a second expert opinion was apprehended.

In country where the head is furious, not even the speaker of parliament, our first female speaker Rebecca Kadaga’s opinion matters. Just like many Ugandans, she will have to waste some days visiting our police for questioning. When the head is furious, everything is nothing, not even our constitution that gives parliamentarians a right to act independently. So in his furious state, the head decides parliament can only be recalled over his dead body! I am not a good student of our constitution but I think the head had all the liberty at one point that he could have added this to the constitution when it was put in place under his impeccable leadership in 1995.

I take nothing for granted! In this republic we amend the constitution as the powers that be see fit! So soon we might add a clause that says ‘Parliament can only be recalled over the dead body of our beloved leader! But since this is about parliament the bribing of MPs might not work this time!

I think more about this ‘over my dead body’ statement after a year that took some Africans heads of state. And as these ‘idiots and fools’ gathering more signatures to recall parliament and Kadaga in the middle of storm, I say do not flirt death!

Shortly before Christmas I visited Ethiopia. Ethiopia’s leader Meles Zenawi died in August last year and clearly the country is still trying to cope without him- just like he had designed! From the airport to my taxi driver, on the TV news background on the only TV station – state owned ETV, and on most roads in Addis Ababa, the picture of the great leader Meles is there to remind the nation what a great leader he was! No other Ethiopian leader from their great history has had their picture up in various squares and public offices like this. From a far you would be forgiven to mistake these billboards and pictures of Meles to be some advert about some upcoming visit of very important person! So when I heard the ‘over my dead body’ comment from our president, I was reminded of this.

I wish in the new year Ethiopia will realize that Meles is gone and unlike the son of God, he’s not about to resurrect! Those who loved him loved his brilliance to the fullest with total disregard of other actions and those who hated him did so for his ruthless actions. Both groups can still stare at the picture of this man at every corner they turn, six months after his passing! 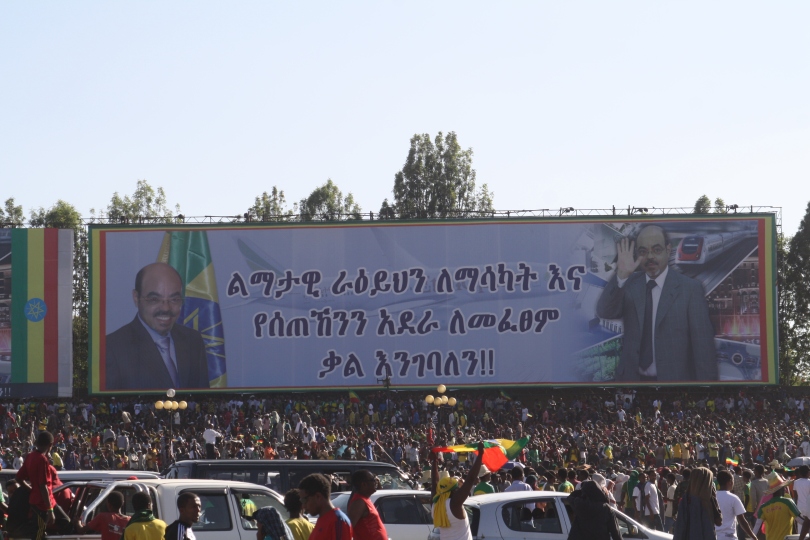