Today about 150 women marched in Kampala to protest police brutality that has characterised th Walk to Work  demonstrations which has taken five lives including a two year old girl in the last month.

The Walk to Work campaign to raise issues of high fuel and food prices currently facing most Ugandan households had been organised by Activists for Change, a group of Ugandans from different opposition parties. The campaign which started on April 11 was met with bullets which left many on hospital beds with serious bullet wounds and the top opposition leader Dr. Kizza Besigye was hospitalised in Nairobi.

Today women from different civil society organisations marched to add their voice to many Ugandans who have said brutality wont the country anywhere.

In attempting to fulfill its obligations in the last few weeks, the State has instead used excessive force resulting in the infringement of some of the fundamental rights enshrined in Chapter 4 of the Constitution including the right to life, the freedom of assembly, freedom of expression, freedom of movement, right to access prompt, fair and timely justice and freedom from inhuman and degrading treatment….We also wish to express our profound disappointment with government’s indifference, exhibited by the lack of urgent action to curb the situation and apparent disregard of pressing priorities in allocation of government expenditure.

We as Women in Civil Society are hereby convening to register ourdeep concern and condemnation on the use of excessive force by the Police and other security agencies and subsequent escalating violence and to call upon the State to take critical measures to address the key issues/ concernsraised by the publicso as to avert a national crisis. In particular, we wish to register our deep concern of:

The use of excessive force and especially the use of live ammunition to quell demonstrations,indiscriminate physical assaults on civilians, spraying of vast amounts of tear gas in closed spaces including cars, schools, dispensaries and homes occasioning loss of life and property, severe injuries and pain among innocent children, by standers, those at work and urban dwellers.We are greatly concerned that rather than enjoy state protection, citizens are preoccupied with defending themselves against its wrath;

The brutality of officers of the Uganda Police Force and other security operatives in handling the “Walk to Work”      campaign which amounted to cruel, inhuman and degrading treatment for those that were arrested.

The intimidation of human rights defenders who have spoken out on various issues of concern including the declining space for engagement;

Censorship of the media and a curtailing of press freedom and freedom of expression, including intimidation and security threats to journalists and media houses carrying out their duty as a watchdog of the state and provider of information to the public

The increased erosion of the independence of the three arms of government  and lack of .The actions and decisions of some judicial officers which cast doubt in the minds of the public on whether justice is being done. We are equally concerned that contrary to the public appeal for the perpetrators of violence to be brought to justice, the Minister for Internal Affairs has instead defended the use of brutal force. Such responses from government risk promoting impunity.

The increased militarization of the State and use of armed forces to enforce law and order and quell peaceful protests which heightens risks of violent conflict and will affect the entire population of Uganda including men, women and children.

We are calling upon Government to take proactive measures to address broader social justice issues, and ensure that key concerns voiced by various sections of the public are addressed. We demand for strong policy measures to address issues food security, unemployment, health and education.

The march through Kampala was granted by police on condition that women wouldn’t utter political statements. And it happened!

The women handed over a statement calling for proper investigations into the incidents to the United Nations Special Rapporteur on the situation of Human Rights defenders Margaret Sekagya.

Although the police gave the women’s march a location far away from the city center, there was enough coverage of their issues. One Ugandan told me:

“Such good images of white clad ladies with their pans could do wonders at getting the reluctant middle class off their backsides. White clad Mothers, on the other hand, emphasize peaceful nature of the campaign and also are re-assuring to those who are still hiding.”

The march was well placed on Mothers Day to point out specifically horrifying images we saw in the last weeks of a pregnant woman Ms.Nalwendo shot right in her stomach leaving her intestines hanging out in Kampala during the demos and another incident where a two year old Juliana Nalwanga was shot dead in Masaka. In all deaths we are yet to see any arrest of the perpetrators in the security forces. 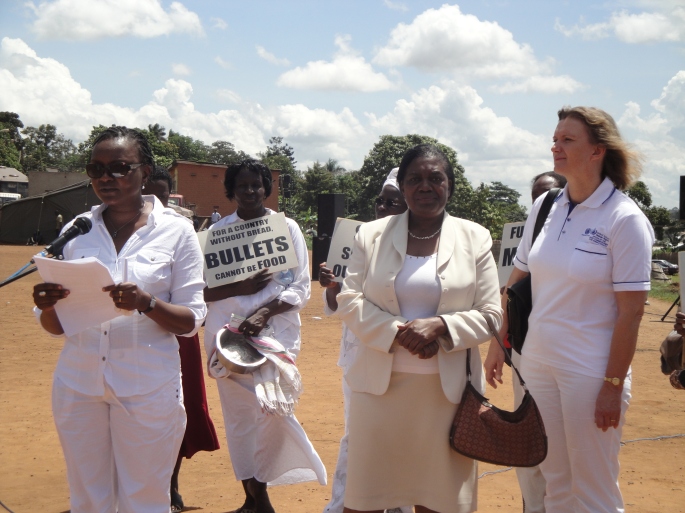