Last week we saw headlines of of the arrest women beat the Police to stage a demonstration in from of the Electoral Commission, which officially should be called the Museveni electoral commission. That was one of the exciting news fro Ugandans as they head into a difficult season of hearing useless promises from politicians who know they dont even need the votes eto stay in power. And then came former Kenyan president Daniel Arap Moi, who was President of Kenya for 24 years campaigns who came to the country invited by President Museveni on the eve his coronation as Eeast Africa’s longest ruling president. The invitation of Moi in itself shows that M7’s league is long and gone. And what advice does expect from a man who presided over a lootocracy and left his country bleeding?

We will be seeing how the media questions these politicians but for now the killer for the day is a cartoon below. 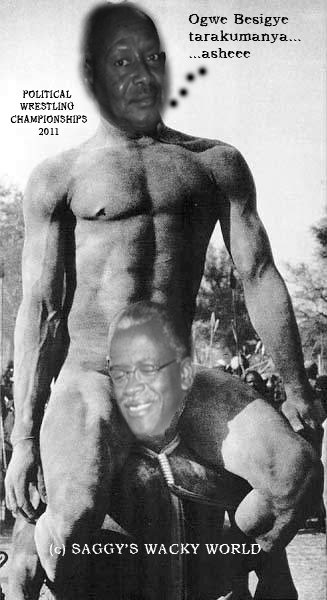 Onecaption is in Runyankole/ Rukiga (Museveni’s language) but it is not that clear whether President Museveni was telling his right-hand man and Security Minister Amama Mbabazi that his main opponent Dr. Kizza Besigye of FDC doesn’t know t know Mbabazi who is carrying the president.