A few weeks ago I spent a night in Addis Ababa –in transit to Accra because of a flight delay. Like on many other trips to the capital that hosts the African Union, you immediately feel that somehow Meles is not dead. Former Prime Minister’s photos still greet you at the airport and on most roads. These photos give you a feeling of visiting an orphaned nation. You will not easily have a clue that Ethiopia has a new leader. Just like the photos of Meles in the streets, his policies are still well implemented by his party EPRDF and journalists like Reeyot Alemu are at still at the receiving end of these undemocratic policies and outright repression that he presided over.

Ms Alemu was today awarded the UNESCO Guillermo Cano World Press Freedom Prize 2013 at a ceremony to mark the 20th anniversary of World Press Freedom Day in San Jose, Costa Rica. I am grateful to witness this as the world recognized a woman who has been held under the vague Ethiopia Anti-Terrorism law.
Alemu’s photo represented her as well as person from International Women’s Media Foundation (IWMF) who collected the award and gave us Alemu’s short worded speech.

Reeyot Alemu talked about the imprisoning of journalists and worried “the situation wont improve until EPRDF leaves power.” She asked, “who will expose the unpleasant truths of those in power if not journalists? Reeyot in her speech said “I call on you to do everything you can 2 stop suppression of press.” Reeyot Alemu’s representative says she’s suffering from bad health and constant threats of solitary confinement

The chair of the jury that awarded her the prize partly explained the decision was based on the fact that Ethiopia is top in countries with the most number of journalists in jails and wanted to highlight their plight.
Ethiopia has the second-highest number of imprisoned journalists in Africa – seven, according to the Committee to Protect Journalists, after their oppressive neighbor Eritrea at least 28.

UNESCO Director General Irina Bokova said that Ms Elemu deserves our praise together with other journalists who defend freedoms we enjoy everyday.

Here is Reeyot’s story as captured by IWMF.

Reeyot Alemu has been imprisoned in Ethiopia for more than a year, branded as a terrorist. She is one of many journalists who have been arrested, interrogated and threatened in her country. What makes Alemu exceptional are her commitment to work for independent media when the prospect of doing so became increasingly dangerous, her refusal to self-censor in a place where that practice is standard, and her unwillingness to apologize for truth-telling, even though contrition could win her freedom. In jail, Alemu was offered clemency if she agreed to testify against journalist colleagues. She refused and was sent to solitary confinement for 13 days as punishment for her failure to cooperate. She is currently being kept at Kality prison, which is known for its filthy conditions. Recently, she has fallen ill; in April of this year she underwent surgery at nearby hospital to remove a tumor from her breast, after which she was returned to jail with no recovery time.

Late Ethiopian Prime Minister Meles Zenawi publicly attacked non-state members of the press, calling them “messengers” of terrorist groups. Increasingly, “terrorist” is a label attached to any entity with an opinion on politics, social issues or human rights that does conform to government rhetoric. In the capital city of Addis Ababa, Alemu worked for numerous, often short-lived independent publications. At least four news outlets to which she contributed were forced out of business by the Ethiopian government. Her reporting explored the root causes of poverty, lack of balance in national politics and gender equality. In 2010, she founded her own publishing house and a monthly magazine called Change, both of which were shuttered.”

To end impunity of a regime is a tough task as the same party remained in power in Addis Ababa after the death of Meles Zenawi. Hope this award and many more efforts will increase the pressure on Prime Minister Hailemariam Desalegn to end this impunity and give more space for freedom of expression and media freedom. 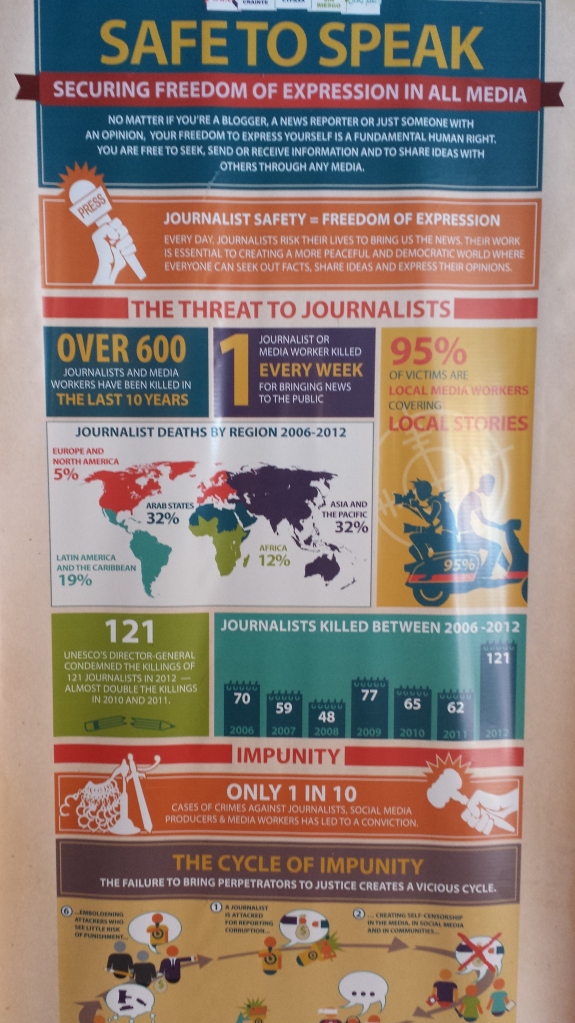 Back in Uganda Human Rights Network for Journalists (HRN-J) issued a report showing that there’s increased restrictive legal regime even though our constitution is very progressive on press freedom and freedom of expression. For instance the Anti-Pornography Bill before parliament has far reaching implications for media freedom in Uganda.

Also other issues that make a Ugandan journalist unsafe to report are impunity, lack of professionalism among security agencies, infiltration and impersonation.

In the report it is interesting to not that the use of hate speech against the media by politicians including the president is on the increase. During walk to work protest President Museveni labeled certain media houses economic saboteurs ironically these are media houses that had done a great deal in reporting human rights abuses that came with the protests and riots. 9 people were killed and today government has never brought any police or military officers to book for the shootings.

Ugandan journalists are also facing targeted beatings, which have intensified, and these are both from security forces and private individuals. The Police tops in the assault on journalists of the security forces. The government has also set up media watch units in their bid to ensure media doesn’t ‘error’.

HRN-J says there’s need to go beyond physical protection from harm for journalist and also move to deal with “psychological security of the journalists in regard to their ability to do journalistic work without the constant lingering fear that they are being watched or that a mere mistake in execution of their work will be an opportunity for the state to come after them.”

This year’s theme is “Safe to Speak: Securing Freedom of Expression in All Media” and online safety is at the center stage and ensuring that online/internet freedom is up held. A quote by Jack DuVall President of ICNC emphasizes Internet freedom and what we should do to have it.

The internet is a vast new civic and social space in which we interact with others. If we want to receive tolerance and respect online, we should offer that — and admonish those who don’t. The alternative is to turn the Internet into a zone for litigation and regulation, which only gives the state an excuse to arrest you for what you say online. Social civility helps protect free speech.