For some time, secrecy had surrounded a racist deal made by an openly racist Israeli government towards African immigrants and some leaders of African countries.
When I first saw this report I thought, what an all-new low we are hitting in assisting trade in humans and promoting racism! I hoped that my president still had some moral bit left especially on an issue that concerned discrimination and dehumanization of Africans. But i was wrong!

A gag order on a secret agreement between governments of Israel and Uganda to deport African immigrants to Uganda was lifted.
Most immigrants in Israel are from Eritrea, Ethiopia and Sudan. 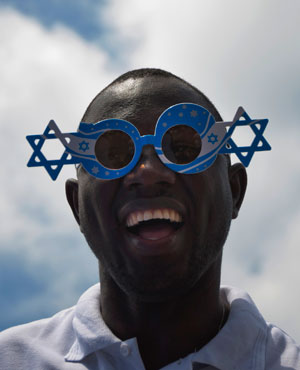 This deal between President Museveni, and Israel will see Uganda take in tens of thousands of African migrants or in some cases serve as a transit station.
Israeli Interior Minister said that they had obtained consent from Museveni government which a foreign ministry official was quick to refute . I say it is Museveni because there’s almost no respect for other aspects of government by Museveni.

“In the first stage we will focus on raising awareness within the population of infiltrators while helping them with the logistics of their departure including their airfare and dealing with possession they accumulated.”

This is President Museveni’s deal of shame! Back home no one knows yet–probably only Museveni and his close friends do- where these thousands of African migrants will be resettled or what warehouse he will keep them in while in transit.

The support of forceful removal of Africans from Israel is deplorable and I am deeply gutted that for his support for racism and violation of international laws- Museveni gets arms as a reward!

I am left to ask, Museveni where is your humanity? What’s the difference between Museveni and slave traders? Why would you be willing to inflict so much pain on a people who have already suffered enough?

Eritreans are fleeing Eritrea in mass numbers from Isaias Afewerki’s insane regime that has turned a country into a prison; the Sudanese are yet to find a life without Bashir. Museveni runs a country where each citizen has a one-dollar health budget for a whole year but his love for ammunition and power outweighs all this human suffering.

Only Museveni’s desire will be fulfilled if this deal goes ahead. And that desire is to arm himself into his life presidency!

But why stop at Israel? Museveni government could expand its bundle of desires. He could for instance have an ‘Africans for Pasta’ or ‘Cars for African migrants’ deals with the Italians since the country is at the height of lunacy and all out racism against African migrants. Italy is that place where an African football player gets treatment for an injury and a mayor of a city says he is the reason his heathcare system is going down!

I don’t know what the Maltese government can offer but for sure Museveni can find something he lacks in his huge state house, knowing he could be in that house for the next 10 years. Don’t forget Spain!

Museveni might also want to assist the UK where the border Agency targets Black people throughout the country each day.
He could ask them to change the phone numbers of the UK Home Office racist vans asks if you are illegal in UK. We could, in exchange for something, put Uganda Police number 999 and announce a good package for those “stranded Africans” to come live in Uganda.

We could also launch a campaign similar to the ‘Gifted by Nature’, remember that? That CNN campaign that our first son in-law launched to make us look good on the international scene. The Campaign, which Ugandan taxpayers ‘happily- as they always do’ coughed Shs640 million for.

We could reap big from these racist governments by actively being involved in the racism business with them! With just lines like “Be illegal no more, Uganda is calling.”

This trade in African migrants stands to be very lucrative. We could put it as a priority ahead of other economic activities like oil drilling and agriculture.

It doesn’t matter if the migrants are from Senegal, Nigeria, Zimbabwe, Eritrea or Ethiopia, we can save them all and at the same get ‘Kintu kidogo’ (supposed to be sounded in Ugandan Swahili)!

Then we will be able to pay our poor teachers and also save university lecturers from becoming goat herders. We could raise the one-dollar healthcare budget per year to five. All these monies we can cater for national budget that is giving us trouble after aid was cut because of ‘alleged’ corruption.

We are well-known good hosts for refugees- except for a few that are a pain in the neck of one great East African leader. Those ones we freely leave to be tortured but on the whole we are good hosts. Ask the Rwandans, Congolese, Kenyans and recently President Kikwete ‘sent’ us Kinyarwanda speaking Tanzanians.

By end of 2012 Uganda hosted to over 200,000 refugees from these countries and with renewed fighting in Congo, the number has increased.

Our president will be remembered along side Patrice Lumumba, Nelson Mandela and other great African leaders that, for many decades after independence, we have failed to give the continent.

Promise not to treat these migrants like the Jamaicans- 3rd generation are still treated as foreigners in Ethiopia. For us we will accept these migrants as citizens because really anyone can easily possess a Ugandan passport – the Jamaicans still have a long away to get Ethiopian citizenship with the country’s rigid citizenship laws still intact. The difference is they came to Ethiopia not by force but at the invitation of Emperor Haile Selassie. Our president could get close to such historic figures!

Promise the immigrants great stuff because we are good at promises- check Museveni’s 2006 unfulfilled election promises. Once they are here, they are on their own. This is Uganda! It is a free country! Government wont bother you so don’t bother it!

After all our Mzee needs all the international pats on the back as he plans to go nowhere after 2016. For get the East African countries’ arms race recently reported, we will have enough enemies within to use these arms against.

Don’t even speak to parliament about this! The Big Man has already threatened to topple it anyway. Of what use is it to ask 370+ people on such matters of international importance?
Like renowned Ugandan journalist Charles Onyango Obbo tweeted this is pragmatism at work!

@RosebellK That M7 for you. They say he has made pragmatism a philosophy.